The Destructive and Instructive Force of Hurricane Ian

Hurricane Ian will not be forgotten anytime soon. With total insured losses already estimated to be upwards of $74 billion, Ian could end up being the costliest storm in Florida history; on a national level, it could end up being second only to Katrina, even after adjusting for inflation.

But, there may have been a silver lining around the storm’s dark clouds. Ian could end up yielding important new insights into hurricane behavior – particularly insights into where, when, and how hurricanes produce lightning.

Ian exhibited complex lightning behavior as it approached Florida. But that behavior occurred in a region where AEM was fully prepared to measure and record the data in detail. With all the data that we captured about Ian, the storm will serve as a useful case study for hurricane researchers for years to come.

What made Hurricane Ian so unusual?

Hurricane Ian produced an extraordinary amount of lightning. Over a 48-hour period, as the storm left Cuba and approached Florida, AEM’s network of weather stations and lightning sensors recorded no less than 98,176 lightning flashes and 839,858 lightning pulses.

Even more fascinating, Ian produced a substantial amount of lightning in and around its eyewall. The eyewall is the central ring of wind and rain around the clear, calm eye of the storm, where the storm produces its strongest wind speeds. The video below, which I compiled from data captured by AEM’s lightning detection network and the U.S. national radar network, clearly shows that the eyewall of Hurricane Ian produced a significant amount of lightning as it left the northwest coast of Cuba, then again as it made landfall along the west coast of Florida. This was unusual because hurricanes typically don’t produce much lightning around their eyewalls over prolonged periods. In regular thunderstorms, vertical winds cause various kinds of ice particles, like graupel and snowflakes, to collide with each other. This contact separates negative and positive charges, which creates electric fields that can cause lightning. Since most hurricanes are made up of very warm clouds that don’t have a lot of ice content, they tend not to produce much lightning.

The small percentage of hurricanes that strengthen into major hurricanes (Category 3-5) often do so through a complicated process called an eyewall replacement cycle. It’s a natural part of the hurricane life cycle for the eyewall to weaken on its own after some time goes by. If the storm is still churning over warm ocean waters and thus supplied with plenty of fuel when the eyewall starts to break down, a new one forms outside of it. This new ring of powerful winds and strong upward motion develops quickly and contracts inward to replace the old eyewall.

“Surges in lightning activity in the storm’s…eyewall…tend to be associated with periods of rapid intensification.”

Because the storm clouds in and around the eyewall are growing vertically while the eyewall replacement is going on, they end up getting very tall at a fast enough rate to have a lot of ice in them for a little while, which leads to increased lightning. Unfortunately, as a hurricane’s new eyewall contracts inward and its storm clouds surge upward, it also tends to spin faster (like a figure skater pulling their arms inward). This makes the horizontal winds get even more powerful than they were before the eyewall replacement cycle started.

Surges in lightning activity in the storm’s inner core and eyewall therefore tend to be associated with periods of rapid intensification. And, that’s exactly what we saw happen with Hurricane Ian.

Just before the storm made landfall in Florida, we saw a spike in lightning activity, which accompanied a period of rapid intensification. As it hit land, Ian’s wind speeds reached 155 mph, just a few miles per hour shy of the most dangerous Category 5 status. With those intense winds also came the terrible storm surge that devastated Fort Myers, as the winds in the eyewall forcefully pushed water up and forward along the hurricane’s path.

As much as we have learned about hurricanes over the past several decades, there are still many gaps in our scientific understanding. For example, while eyewall replacement cycles tend to bring surges in lightning activity, the amount of lightning in the inner core tends to decrease after a new eyewall stabilizes. Scientists aren’t sure exactly why, but the more thoroughly we can measure lightning in hurricanes that undergo eyewall replacement cycles and rapid intensification, the more we can explore potential hypotheses.

Fortunately, as Ian barreled past Cuba, over the Gulf of Mexico, and through Florida, AEM was well positioned to track its every movement. With 400-500 weather stations located throughout Florida alone, plus additional stations in Cuba, our global network was able to track the storm’s movement and capture a wide variety of data points (such as temperature, pressure, wind speed, and wind direction) in detail.

What’s more, at least 10% of those stations include lightning sensors. With each sensor capable of delivering precise and sensitive measurements of lightning up to 400km away, our lightning detection network provided more than enough coverage to capture almost all of Ian’s cloud-to-ground lightning and most of its in-cloud lightning as it approached Florida.

With all the data that AEM and others collected from Ian, hurricane researchers will be able to scrutinize this case study in detail…which will hopefully yield important advances for the meteorological community’s understanding and prediction of hurricane behavior. 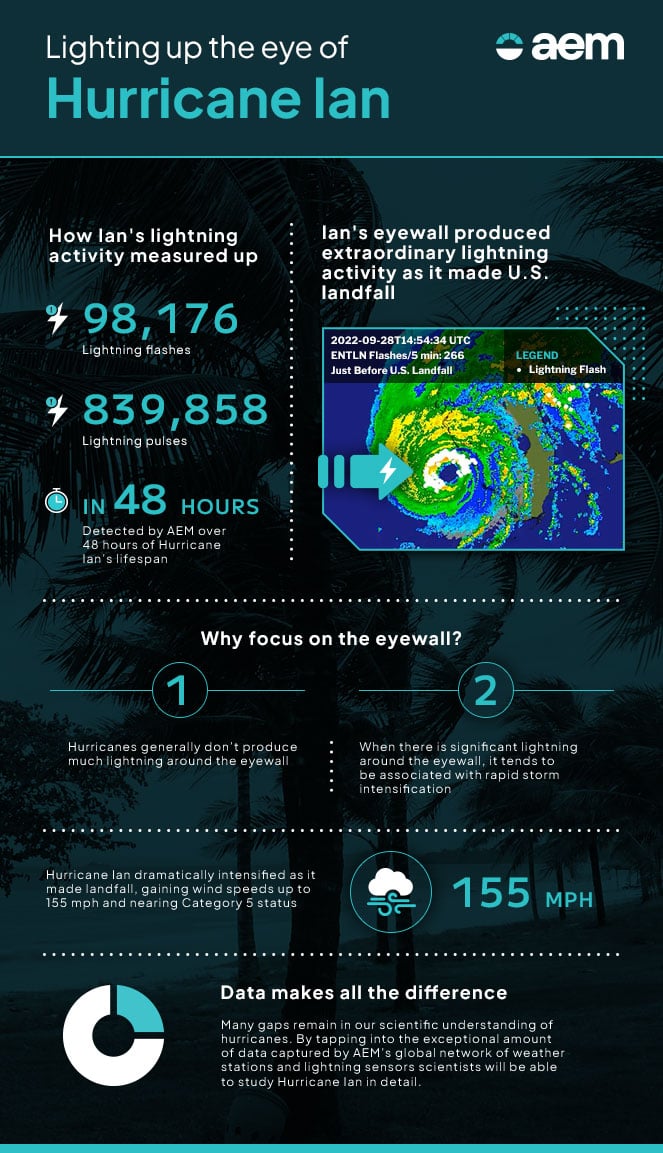 It’s our mission at AEM to help organizations like yours survive and thrive in the face of all types of environmental risks, including severe weather. Our experts will gladly help you figure out the exact combination of measurement, monitoring, and alerting solutions to best help your organization stay on top of weather-related risks. Click here to learn more.