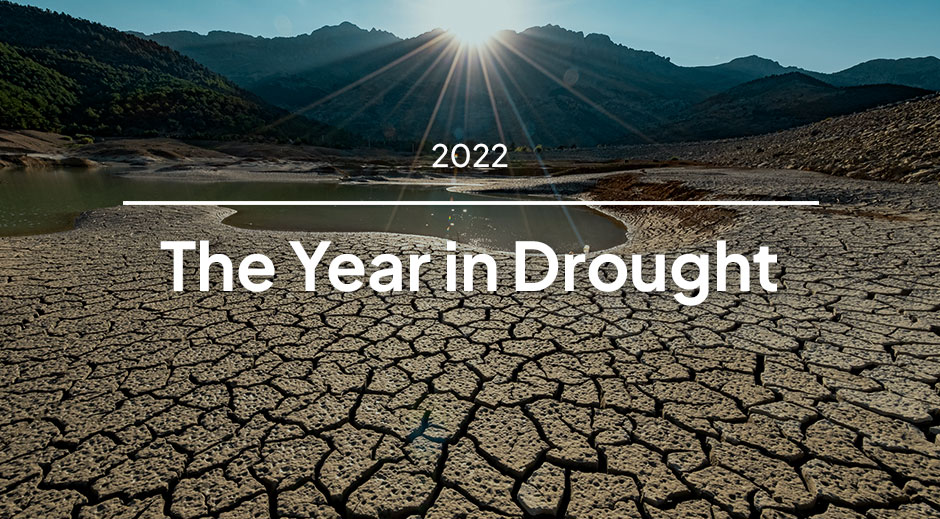 In many ways, 2022 could be considered the year of the drought. Dry conditions prevailed across much of the globe throughout the year, putting the health and safety of millions at risk and significantly impacting agricultural output just about everywhere.

What is a drought, exactly?

Most people have a general understanding of what a drought is or how it presents, but nailing down a precise definition that works both for weather scientists and laypeople is a little challenging.

According to NASA, a drought is a period of unusually persistent dry weather that continues long enough to cause serious problems such as crop damage and/or water supply shortages.

The National Drought Mitigation Center expands a little on that definition, saying, “In the most general sense, drought is defined as a deficiency of precipitation over an extended period of time (usually a season or more), resulting in a water shortage… Natural impacts of drought can be made even worse by the demand that humans place on a water supply.”

That final sentence from the NDMC is crucial to understanding droughts from a 360-degree perspective, as they are as much a water management challenge as they are a severe weather challenge.

What factors cause a drought?

As we’ve identified, there are both weather and human factors at play when drought occurs. Of course, the biggest piece of the puzzle is dryness, but dryness can have a variety of root causes.

Cyclical weather patterns can be one culprit when it comes to the major regional drying that causes droughts. A great example of this is La Niña, an atmospheric phenomenon in which warm water from the ocean’s surface is blown across the Pacific toward Indonesia. This temperature shift is generally associated with more rain in the Northwestern United States and Brazil and drought in the Southwestern US as well as Peru and Chile.

Typically, La Niña years occur every three to five calendar years. With that said, we’ve currently been in La Niña patterns since summer of 2020. The last prolonged La Niña period like this fell between 1998 and 2000 and caused widespread drought across the United States as well as flooding in Mozambique.

In addition to well-understood and documented phenomena, climate change also has a hand in our current trend toward droughts. Scientists agree there’s a clear correlation between climate change and droughts, although there is not yet a consensus on the exact relationship. Some postulate that manmade climate change is responsible for as much as 46% of the severity of the current megadrought across the Southwestern U.S. and Mexico.

Generally speaking, as things continue to get warmer, they will also get dryer, since higher temperatures facilitate increased evaporation. It stands to reason that, if we continue to set temperature records, we will see more and more droughts across the globe.

While we generally think of people as victims of drought, it’s also true that some human activities contribute to the problem. By taming rivers with dams to support large-scale agriculture, we’ve rerouted billions of gallons of water in ways that specifically rob it from one region to give it to another. When things get dry upstream or precipitation patterns shift, it puts significant strain on the whole system.

Deforestation can also significantly reduce the amount of ground water, destroying a region’s natural drought resilience system. Pumping ground water can similarly rob the environment of its ability to recover from a drought, so tapping those resources during a time of extreme dryness must be weighed against the consequences on a case-by-case basis.

What are the effects of drought?

The greatest consequence of drought is obviously the threat to human life, both at the individual and societal levels. That threat manifests in several different ways:

If you followed the weather, or even the news, closely in 2022, chances are you heard the word “drought” a great deal. That’s because the third consecutive La Niña year continued the punishing drying trend in the American West, Europe was setting records for high temperatures and low water levels throughout the summer, and East Africa was facing its third consecutive year of failed harvests due to drought.

Droughts in the United States

Drought was one constant for Americans throughout 2022. According to Drought.gov, at least 51% of the continental United States was “abnormally dry” on any given week this year.

European heatwaves made global headlines this summer, but the continent’s susceptibility to drought was a topic of concern months before the double-heatwave in June. Much of Europe actually started 2022 in a drought, and back in March, scientists were concerned because reservoirs in Italy were at their lowest observed levels and drought conditions were generalized across the continent, not localized to a particular country or region. 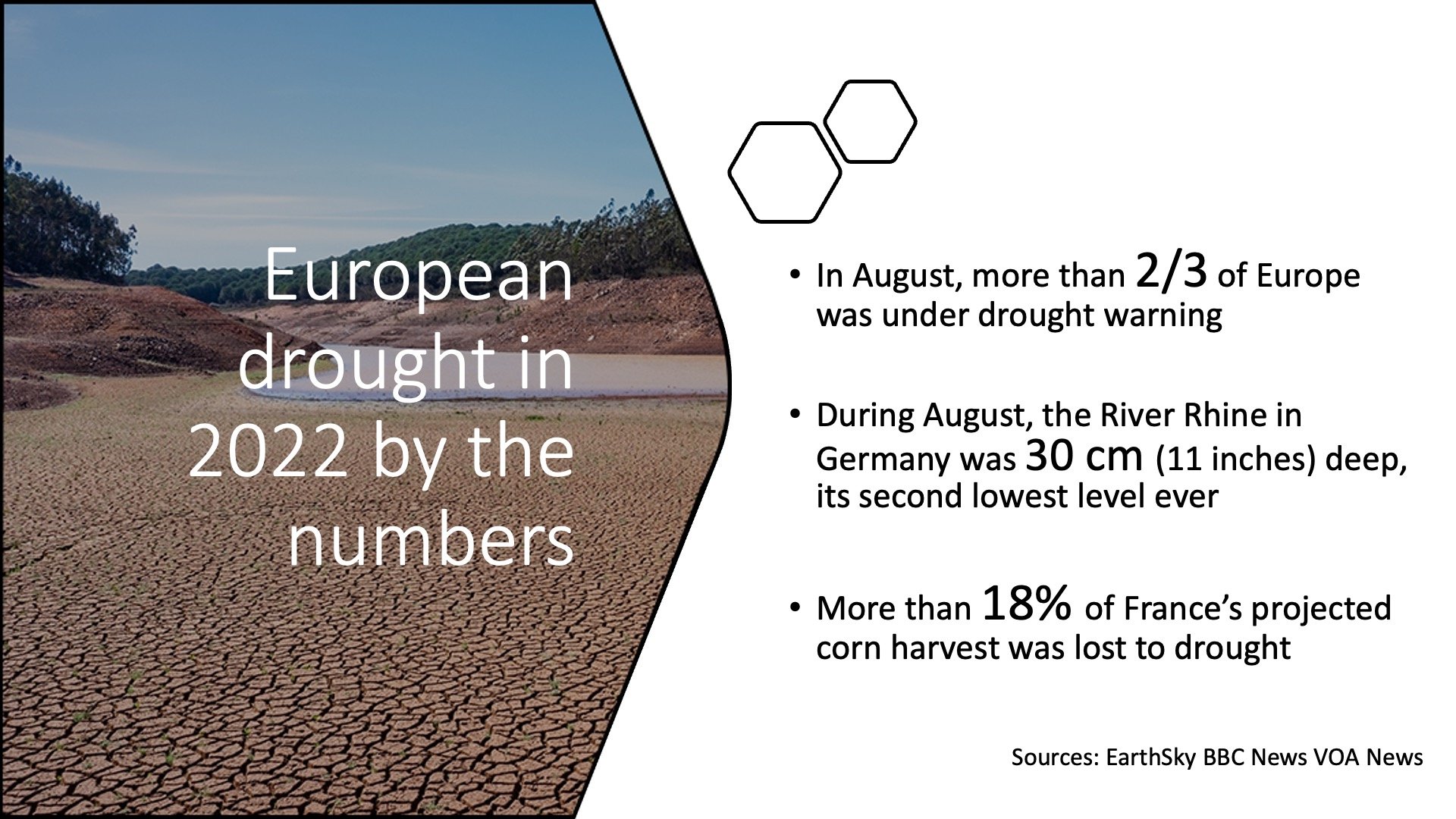 During the summer, low precipitation rates continued as temperatures rose, extending the drought and creating France’s worst fire season in over a decade. When the rain finally came in August, the soil was too dried out from the arid summer to retain water, leading to flash floods.

In East Africa, 2022 marked the fourth consecutive year of horrific droughts that have led to massive crop failures and deaths. According to the U.N.’s World Food Program, 40% of the population of Somalia alone is at risk of starvation and 20 million people across East Africa are at risk of severe hunger.

The Horn of Africa is rapidly emerging as a case study for how drought can escalate into a global humanitarian crisis in the age of climate change. As World Health Organization’s regional situation overview explains, “Food insecurity in the region is contributing both to increased health risks and to deteriorating health-seeking behaviors.” 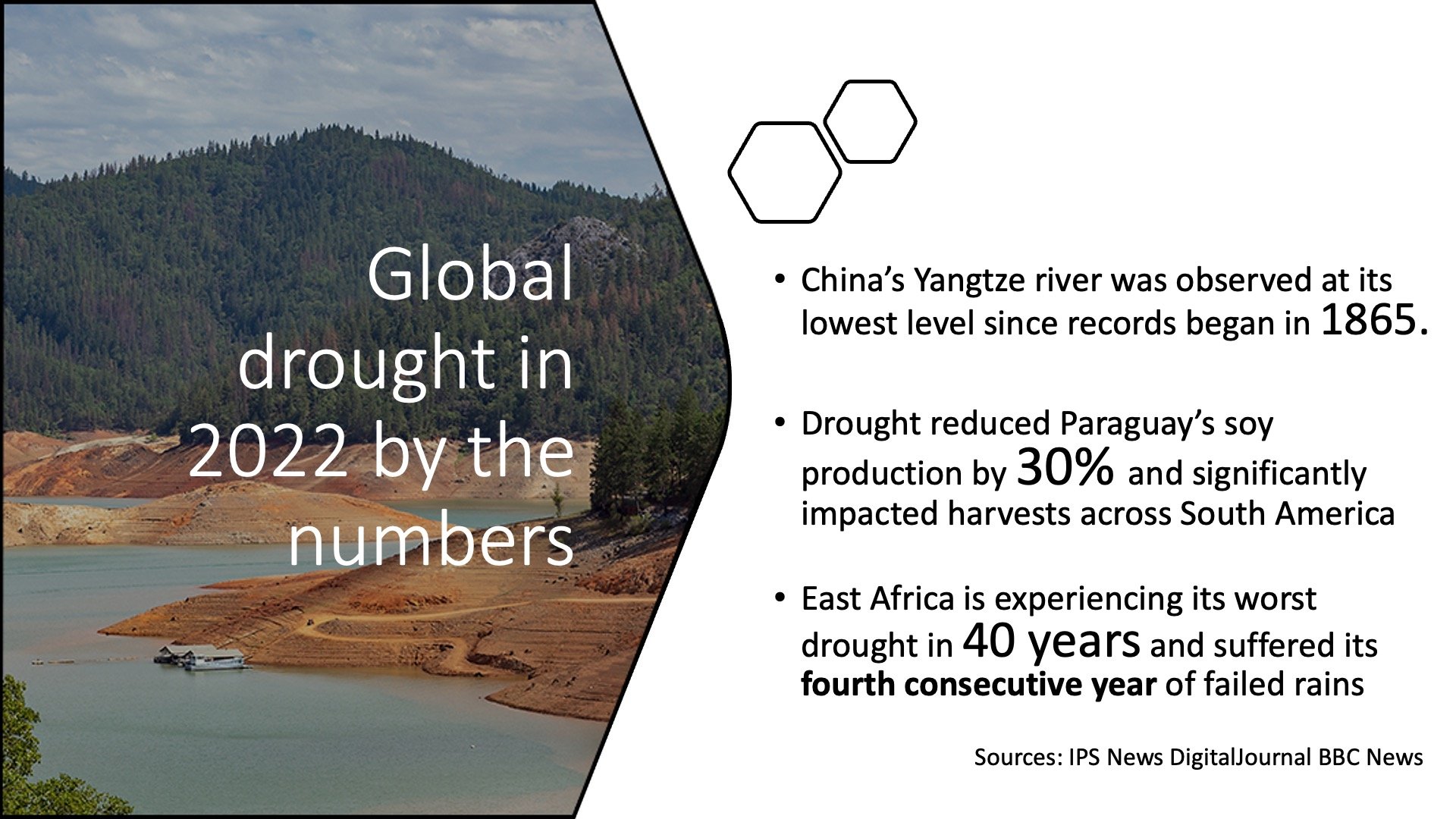 In parts of Central and South America, people are literally praying for rain to come before the situation gets any worse.

In China, the country’s largest river and two largest freshwater lakes hit record lows over the summer, with rainfall in the Yangtze River drainage area down 30% year-over-year in July and 60% below average in August. 2022 is on record as the country’s hottest summer since they began keeping official records in 1961.

The Mekong River in Southeast Asia provided some cause for hope in 2022, as the region ended four years of record-setting drought that had seen the river at its lowest levels ever back in 2021. The area’s recovery is dependent on not only continued rainfall but also a massive collaborative effort to improve water management along the Mekong.

If you're a water management professional looking to keep your community well-supplied with safe, clean water, AEM is here to help. Our water flow, level, and quality sensors help water utilities, municipalities, farms, and beyond gain a complete view of their water resources so they can manage with the community and the environment in mind.

When you're ready to begin drought-proofing your community, be sure to contact us!